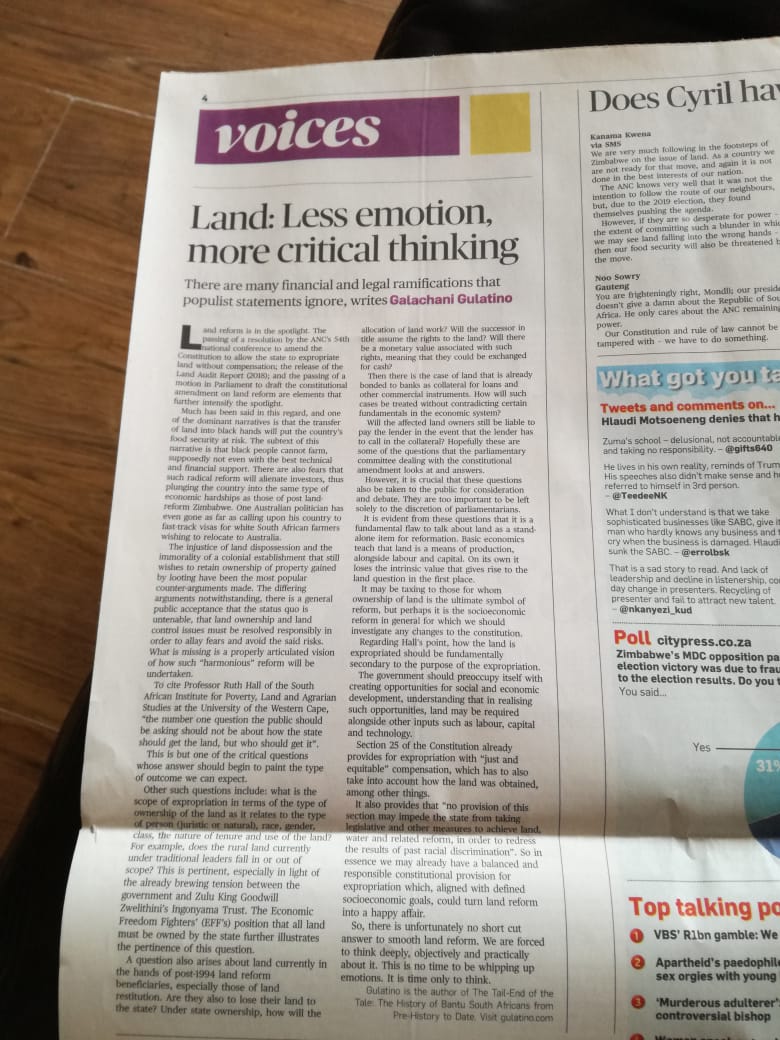 Land reform is in the spotlight. The passing of a resolution by the ANC’s 54th national conference to amend the Constitution to allow the state to expropriate land without compensation; the release of the Land Audit Report (2018); and the passing of a motion in Parliament to draft the constitutional amendment on land reform are elements that further intensify the spotlight.

Much has been said in this regard, and one of the dominant narratives is that the transfer of land into black hands will put the country’s food security at risk. The subtext of this narrative is that black people cannot farm, supposedly not even with the best technical and financial support. There are also fears that such radical reform will alienate investors, thus plunging the country into the same type of economic hardships as those of post land-reform Zimbabwe. One Australian politician has even gone as far as calling upon his country to fast-track visas for white South African farmers wishing to relocate to Australia.

The injustice of land dispossession and the immorality of a colonial establishment that still wishes to retain ownership of property gained by looting have been the most popular counter-arguments made. The differing arguments notwithstanding, there is a general public acceptance that the status quo is untenable, that land ownership and land control issues must be resolved responsibly in order to allay fears and avoid the said risks. What is missing is a properly articulated vision of how such “harmonious” reform will be undertaken.

To cite Professor Ruth Hall of the South African Institute for Poverty, Land and Agrarian Studies at the University of the Western Cape, “the number one question the public should be asking should not be about how the state should get the land, but who should get it”.

This is but one of the critical questions whose answer should begin to paint the type of outcome we can expect.

Other such questions include: what is the scope of expropriation in terms of the type of ownership of the land as it relates to the type of person (juristic or natural), race, gender, class, the nature of tenure and use of the land? For example, does the rural land currently under traditional leaders fall in or out of scope? This is pertinent, especially in light of the already brewing tension between the government and Zulu King Goodwill Zwelithini’s Ingonyama Trust. The Economic Freedom Fighters’ (EFF’s) position that all land must be owned by the state further illustrates the pertinence of this question.

A question also arises about land currently in the hands of post-1994 land reform beneficiaries, especially those of land restitution. Are they also to lose their land to the state? Under state ownership, how will the allocation of land work? Will the successor in title assume the rights to the land? Will there be a monetary value associated with such rights, meaning that they could be exchanged for cash?

Then there is the case of land that is already bonded to banks as collateral for loans and other commercial instruments. How will such cases be treated without contradicting certain fundamentals in the economic system?

Will the affected land owners still be liable to pay the lender in the event that the lender has to call in the collateral? Hopefully these are some of the questions that the parliamentary committee dealing with the constitutional amendment looks at and answers.

However, it is crucial that these questions also be taken to the public for consideration and debate. They are too important to be left solely to the discretion of parliamentarians.

It is evident from these questions that it is a fundamental flaw to talk about land as a stand-alone item for reformation. Basic economics teach that land is a means of production, alongside labour and capital. On its own it loses the intrinsic value that gives rise to the land question in the first place.

It may be taxing to those for whom ownership of land is the ultimate symbol of reform, but perhaps it is the socioeconomic reform in general for which we should investigate any changes to the constitution.

Regarding Hall’s point, how the land is expropriated should be fundamentally secondary to the purpose of the expropriation.

The government should preoccupy itself with creating opportunities for social and economic development, understanding that in realising such opportunities, land may be required alongside other inputs such as labour, capital and technology.

Section 25 of the Constitution already provides for expropriation with “just and equitable” compensation, which has to also take into account how the land was obtained, among other things.

It also provides that “no provision of this section may impede the state from taking legislative and other measures to achieve land, water and related reform, in order to redress the results of past racial discrimination”. So in essence we may already have a balanced and responsible constitutional provision for expropriation which, aligned with defined socioeconomic goals, could turn land reform into a happy affair.

So, there is unfortunately no short cut answer to smooth land reform. We are forced to think deeply, objectively and practically about it. This is no time to be whipping up emotions. It is time only to think.

– Gulatino is the author of The Tail-End of the Tale: The History of Bantu South Africans from Pre-History to Date.