The role of culture in country development 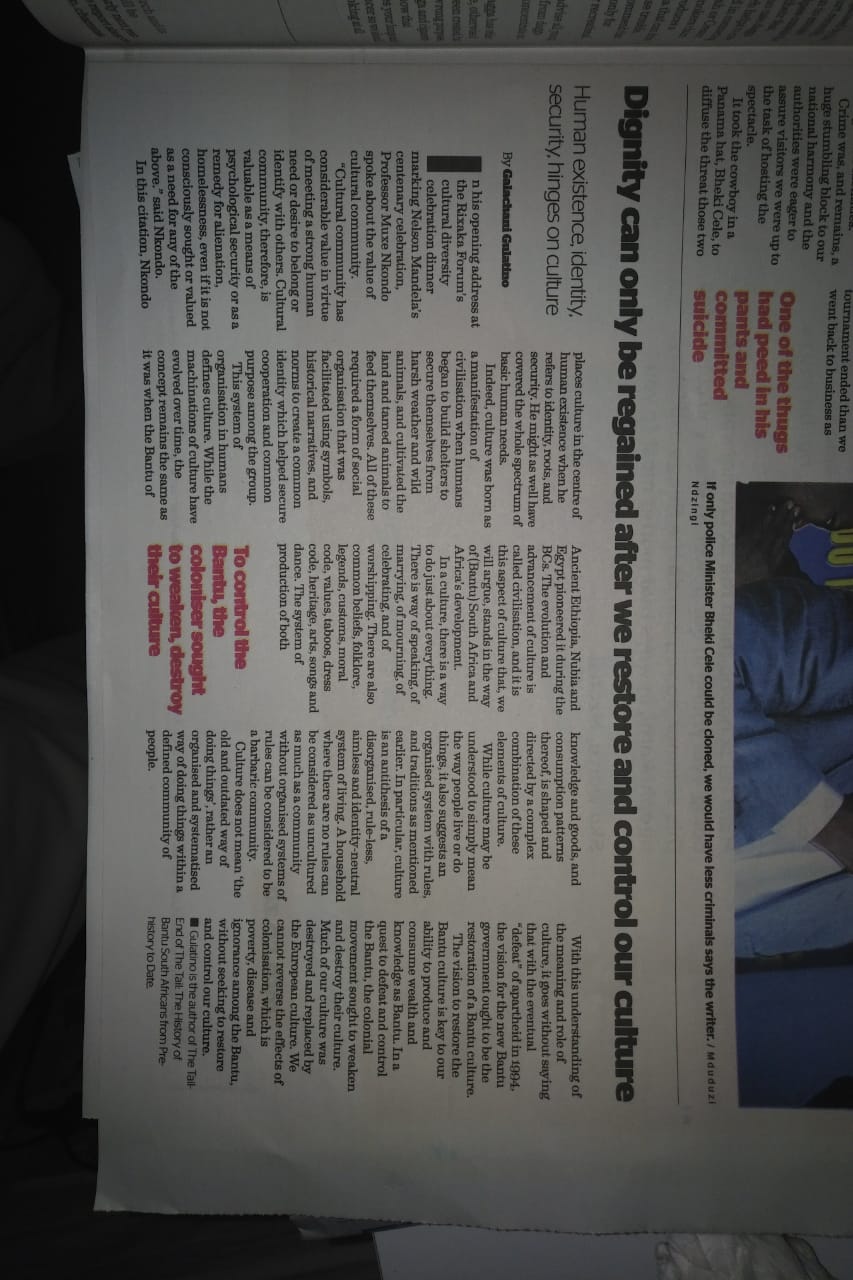 The role of culture in country development

In his opening address at the Rixaka Forum’s Cultural Diversity Celebration dinner marking Nelson Mandela’s centenary, Professor Muxe Nkondo had this to say about the value of cultural community:

In this citation, Nkondo places culture in the centre of human existence when he refers to identity, roots, home and security. He might as well have added food, covering the whole spectrum of basic human needs. Indeed, culture was born as a manifestation of civilization when humans began to build shelters to secure themselves from hash weather and wild animals, and cultivated the land and tamed animals to feed themselves. All of these required a form of social organisation that was facilitated using symbols, historical narratives, and norms to create a common identity. Common identity helped secure cooperation and common purpose among the group.

This system of organisation among humans defines culture. While the machinations of culture have evolved over time, the concept remains the same today as it was when the Bantu of Ancient Ethiopia, Nubia and Egypt pioneered it during the BCs. The evolution and advancement of the machinations of culture is called civilisation, and it is this aspect of culture that, we are going to argue, stands in the way of (Bantu) South Africa and Africa’s development.

In a culture, there is a way of doing just about everything. There is way of speaking, of marrying, of mourning, of celebrating, and of worshiping. There are also common beliefs, folk lore, stories, legends, norms, customs, moral code, idioms, values, taboos, rituals, dress code, heritage, arts, songs and dance. The system of production of both knowledge and goods and of consumption patterns thereof, is shaped and directed by a complex combination of these elements of culture. It can be said also, that the productivity of a community is directly proportional to the strength of its culture, i.e. the ability of such community to “secure cooperation and common purpose among the group”.

While culture is sometimes understood to simply mean the way people live or do things, strictly speaking, it also suggest an organised system with rules, traditions and all those elements mentioned earlier. In particular, culture is an antithesis of a disorganised, rule-less, aimless and identity-neutral system of living. A household where there are no rules for example, can be considered uncultured. The same goes for a community that is without organised systems of rules. Such communities are considered barbaric, animal-like communities. Culture should therefore not be understood to mean ‘the old and outdated way of doing things’, which is actually tradition, rather, as we have already suggested, an organised and systematised way of doing things within a defined community of people.

Of course cultures are build on traditions, but traditions are not culture, but the foundations of culture. Paying of dowry and celebrating when a man marries a woman is a tradition among Bantu sub-cultures. How the dowries are paid – the cultural practice – has changed over time: from paying using cattle to paying using money. Also, the cultural practice with regard to celebrating has changed from celebrating by singing and dancing to the sound of ‘local’ instruments, to celebrating by dancing to recorded music playing in sound systems. In this regard, culture is evolutionary and adaptive to changing material conditions. The case for culture is therefore not a case for the old ways, but a case for an organised way in which a community lives, rooted in certain traditions.

When different cultural communities come into contact with each other, there is a clash of cultures. The military confrontation that characterises such contact is essentially a contest for the preservation and or control of culture. When the war ends, one culture is assimilated into the dominant between the cultures, or the cultures fuse into a supper culture to which the sub cultures assimilate. When the Persians defeated the Pharaohs of Bantu Egypt, they sought to install themselves “Pharaohs” although they were Persian and not Bantu, the original Pharaohs. Such was the attractiveness of the Bantu Egyptian culture. It can be said therefore, that the contest for power is actually contest for culture.

Legend has it that when Winston Churchill was asked to cut funding to the arts in order to support the war effort during World War II, he responded “Then what would we be fighting for?”

When Bantu fought against the colonial plunder of Africa, from the attacks on Great Zimbabwe by the Portuguese in the mid 1400s, the wars with the Dutch attack from the South in the mid 1600s, the intensification of the attacks during Mfecane following the arrival of the British in 1795, all these resistance wars, were wars of the preservation and control of the culture.

With this understanding of the meaning and role of culture, it goes without saying that with the eventual “defeat” of the colonial system of oppression in 1994, the vision for the new Bantu government ought to have been the restoration of a Bantu culture. It ought to have been restoration of our “way of speaking, of marrying, of mourning, of celebrating, and of worshiping”. The restoration of our “common beliefs, folk lore, stories, legends, norms, moral code, values, taboos, rituals, dress code, arts songs and dance. The system of production of both knowledge and goods, and of consumption patterns thereof…”

The vision to restore control of the Bantu culture is key to our ability to produce and consume wealth and knowledge as Bantu. Little wonder then that it was Bantu culture that, in a quest to defeat and control Bantu, the colonial movement sought to weaken and destroy. Much of our culture has been destroyed and replaced by the European Culture during colonisation. We cannot seek to reverse the effects of colonisation, which is poverty, decease and ignorance among Bantu, without seeking to restore and control our culture. Our apparent failure to reduce poverty and unemployment among Bantu, as well as to fix the rest of the social and economic ills faced by our people, is not unrelated to our total disregard of our culture in applying our efforts to achieve the same.

If, for example, ubuntu as one of our cultural values was consciously applied in our day-to-day life and work, crime and corruption would not be as endemic as they currently are. Of course this is easier said than done given the fact that there are active forces in society which are guarding against any active initiative to restore Bantu culture. These forces manifest specifically in the media, in the school curriculum, the justice and administrative system, organised religion and the workplace, where our culture is actively undermined and ridiculed.

There is a need to reimagine and repurpose the department of Arts and Culture to reflect the true meaning of culture, Arts of which is only a part. To view the department as a department for arts, events and festivals robs the country of the opportunity to create and pioneer a common purpose and vision to reverse the legacy of colonialism. A vision to restore Bantu to become a culturally awakened and a resourceful contributor to the prosperity of the nation alongside the more established and, this must be said, dominant cultures in Mandela’s rainbow nation.

African Indigenous Knowledge for example – which covers areas such as Food Technology, Medicine, Science, Mythology, Religion, Morality, Governance, Arts, and Language – if well harvested, preserved and developed, could create a plethora of goods and services for local and export consumption. This would not only create the much needed employment and economic growth, but reposition South Africa and Africa at large as a respected player in world affairs.

However, outside the said vision and programme to mobilise and resource Bantu cultural communities to value themselves and their ways, Bantu cultural resources will continue to be causalities western imperialism. Like Asian giants such as China and Singapore which have used their cultures as forces of change, South Africa will require political awareness and the will to recognise the value of culture in development. A conscious and well-resourced effort from the government, royal leaders, academia and Bantu civil society Movements, and Bantu intellectuals is required.

This means that space will have to be opened for the non-political partners mentioned here to fully participate in realising this agenda. We cannot and must not allow our hard-fought-for political space to be reduced to just being an aggregator for the distribution of state resource. As said, we need a shared vision rooted in that which is above politics and all else – culture – to have a fighting chance to give meaning to 1994. As things stand, Minister Nathi Mthethwa and his Department of Arts and Culture owe themselves an appointment with a giant mirror, from which they will hopefully see that their real name should be Department of Culture and Development. The Arts and many more important things will follow the name.

By Galachani Gulatino, author of The Tail-End of The Tail: The History of Bantu South Africans from Pre-history to Date